We’ve all been there. You’re driving down the road and suddenly you feel a thud against the side of your car – you look over to see a dent in your beautiful vehicle. It’s an unwelcome sight, and you’re probably already wondering how to repair the damage. Indeed, it can sometimes be expensive to repair car dents, but it’s more than worth the investment in the long run. In this blog post, we’ll explain why it’s important to repair car dents, and how you can go about doing it.

Why Should You Work on Restoring Your Car’s Bodywork?

Here, we bring to you a few reasons why dents on your car should become a memory as soon as you can make it so.

Dents can be unsightly and cause an otherwise attractive car to look like it’s been in an accident—never mind the fact that it probably has. A large dent in a car’s body can also ruin its smooth, sleek exterior and make you a bit less eager to take it out for a spin. Additionally, depending on the size and severity of the dent, it can create a ripple effect that can spread out further along the surface of your vehicle, causing even more damage. These damages can also make your vehicle look older than it is and can lead to premature deterioration of its paint job.

Your car’s paint job can deteriorate

When you ignore a dent in your car, you could be causing more damage than you realize. That dent is likely to lead to long-term damage to your car’s paint job. If the dent is large enough, it can cause cracks in the paint to grow larger and larger. Over time, this can lead to flaking and peeling of the paint, leaving the underlying sealant exposed. In some cases, if the dent is severe enough, it can even damage the sealant itself, leaving bare metal exposed. Once the metal is exposed, it can start to rust, leading to even more costly repair bills.

Even a dent that doesn’t damage the paint can be a terror later on. The damage from dents can start off minor, but before you know it, it can lead to major problems like flaking or peeling of paint from your car’s body. From there, it’s one short hop to rusting, especially in coastal areas. Don’t let a minor dent become an expensive problem – make sure to get it repaired as soon as possible. 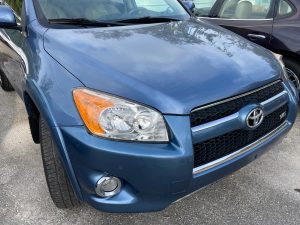 Dents can lead to rust in exposed areas

When a dent appears in your car, it’s important to repair it as soon as possible. This is because the dent can cause water to seep underneath the paint, leading to rust spots. These rust spots can weaken the structural integrity of the car and result in even more damage.

Ignoring paint damage caused by a dent can lead to flaking and peeling of the sealant that keeps your car from rusting. The longer you wait to repair a dent, the greater the chance of rusting and further damage to your car. This can all add up to a hefty repair bill, so it’s important to take action quickly.

It’s not just about your pockets, though. Corrosion can make a car unsafe to drive, and can even be a fire hazard if the car’s wiring gets exposed. This underlines the necessity of quick action on your part.

It’s important to remember that even the smallest dents can hurt your car’s resale value. In fact, studies have found that dents that don’t scratch the paint can affect the resale value of a car by as much as 5 to 15%.

Thankfully, you can easily take care of minor dents through a process called Paintless Dent Repair. The process is fairly simple and cost-effective for minor dents.

Besides affecting the resale value of the car, buyers often worry that dents suggest a car has not been properly cared for. It’s therefore important that you fix any dents in their car before they sell it. If the dents are not fixed on time, rust can set in and cause further damage to the car.

Dents can be Repaired Easily

Whether it is caused by an accident or hail damage, the sight of a dent can be painful and disheartening. But don’t despair! You may not need to spend hundreds or thousands of dollars on repairs. In many cases, car dents can be repaired easily and quickly.

One of the most popular methods for repairing a car dent is called Paintless Dent Repair (PDR). This method of repair is ideal for dents that don’t affect the paint job, which means there is no need to worry about having to repaint the area. Paintless dent repair involves the use of specialized tools to push the metal back into its original shape without damaging the paint. This type of repair is generally less expensive than traditional dent repair methods, so it’s a great option if you’re looking to save some money. 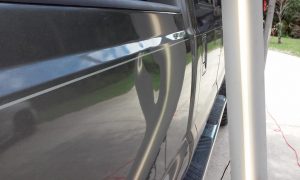 The Best Way to Get Rid of Dents is by Professionals

If you have the right tools and experience, it may be possible to fix dents in a car yourself. However, in most cases, it is better to take your vehicle to an auto body shop and have a professional take care of it. This is especially the case if you’re trying to learn how to repair a bumper dent. Bumpers have gotten trickier over the years.

When it comes to getting rid of dents, there is no better option than Dent Max PDR. Our professional team of experienced technicians uses advanced technology and superior knowledge to accurately identify and fix dents without compromising your car’s factory paint job. With Dent Max PDR, you can rest assured that the job will be done right the first time. We guarantee that we will work on your car until you are completely satisfied with the results, and you’ll have your car back in time for lunch.

Getting a dent fixed professionally is more cost-effective in the long run than attempting to do it yourself. Not only will it save you time and effort, but you can also be sure that your car will look as good as new. So if you want a safe, fast, and professional dent repair service, you can call us or go on and book an appointment any time you need.